This course introduces key concepts of Indian Buddhist thought. Over 5 lectures Bee explains the fundamental themes and problems of Buddhist Philosophy from the early Buddhist teachings on ‘suffering’, ‘karma’ and ‘No-Self’, to the later schools of thought around ‘emptiness’ and ‘mind-only’.

This course introduces key concepts of Indian Buddhist thought. Over 5 lectures Bee explains the fundamental themes and problems of Buddhist Philosophy; from the early Buddhist teachings on ‘suffering’, ‘karma’ and ‘No-Self’, to the later scholasticism and the famous schools of thought around ‘emptiness’ and ‘mind-only’. Each chapter introduces another layer of Buddhist philosophical development and depth. The course forms a very clear and intriguing introduction to the wealth of Buddhist thought.

Professor Bee Scherer, PhD is a long-time practitioner of Buddhism and has been globally teaching as a Buddhist teacher.

After the study of classics, Indic (Sanskrit, Pāli, Prakrits) and Tibetan philology in Germany and the United States, completed by a PhD (Groningen, The Netherlands 2002), Bee published among others on karma; Nāgārjuna and early Mind-only; and, in recent years, on transnational Tibetan Buddhism; radical, reform and socially engaged Buddhism in Asia; and on Buddhist perspectives on disability, gender and sexuality. 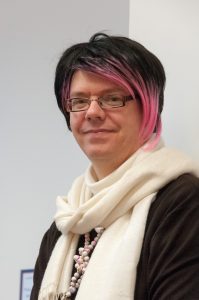 Bee is chair (full professor) of Buddhism at Vrije Universiteit (VU) Amsterdam and rector of the national Dutch Buddhist seminary.

Prof. Scherer has authored more than a dozen monographs and edited volumes in various languages, among which features the substantial Introduction to Buddhism (2005, in German) with a foreword by HH. The Dalai Lama.